It’s been over two months since the release of Come Rain or Shine, and for so many reasons I’ve been offline most of that time (more about that in another update). So, first and foremost, I want to thank all the readers who’ve read the Michigan Seasons trilogy, and especially those that have taken the time to leave ratings and reviews, either on Goodreads, Amazon or elsewhere. Despite my lack of engagement, I have been eagerly checking in.

Michigans Seasons is available in paperback! Three separate volumes: More Than Christmas, After The Snow and Come Rain or Shine. And I must say, Tif’s covers look amazing in the flesh. 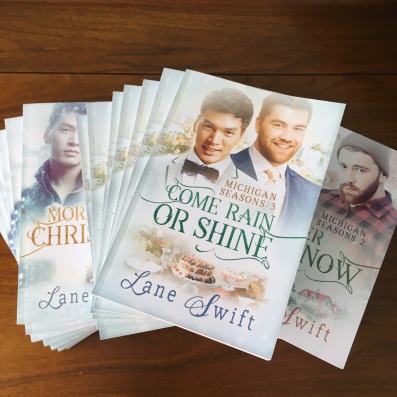 In ebook, More Than Christmas remains FREE at all retailers. After The Snow and Come Rain or Shine will be available on Kindle Unlimited for the next two weeks only. From 16th July 2019, all three volumes will be available wide from major ebook retailers.

More news on what I’m up to and future projects to follow!