With the final installment coming in Spring 2019, the first book in the Michigan Seasons Series, More Than Christmas is now FREE.  Available at all major ebook retailers. 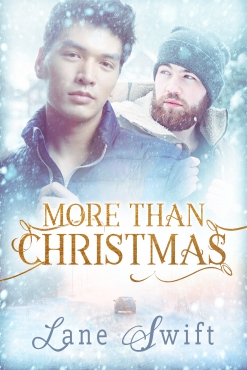 Keeping life simple can be a complicated business...

On a two-year assignment to America, young British auto executive Nick Harris is interested in only one thing—boosting his career—until he meets his hunk of a next-door neighbour, and landlord, Dale Hepburn.

The problem is that Dale’s interest in Nick seems to be more changeable than the Michigan weather. One day they’re training in Dale’s garage gym and he’s giving Nick smouldering looks from under the barbell. The next, Nick’s attempts to turn up the heat on their friendship get the cold shoulder.

Dale finally claims he’s holding out for love that will last, and Nick’s stay in America is only temporary. But a neighbour’s accidental remark suggests otherwise. Humiliated and hurt, Nick confronts Dale—with disastrous consequences. Now, with painful truths revealed, and hearts bruised, Nick must find a way to convince Dale they can be more than Christmas.

Follow a Brit’s romantic journey through his first Halloween, Thanksgiving, and Christmas in Michigan, including a costume party, a blizzard, and a family crisis, to a heartwarming HFN